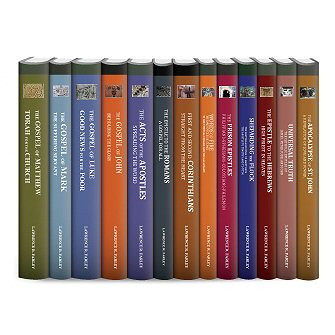 The entire set of 13 books!

About the Orthodox Bible Study Companion Series: This commentary series was written for the average layperson. Working from a literal translation of the original Greek, the commentary examines the text section by section, explaining its meaning in everyday language. Written from an Orthodox and patristic perspective, it maintains a balance between the devotional and the exegetical, feeding both the heart and the mind.

The Gospel of Matthew: Torah for the Church

The Gospel of Luke: Good News for the Poor

The Gospel of Mark: The Suffering Servant

The Gospel of John: Beholding the Glory

Words of Fire: The Early Epistles of St. Paul to the Thessalonians and the Galatians

The Epistle to the Hebrews: High Priest in Heaven

The Epistle to the Romans: A Gospel for All