The Age of Paradise: Christendom from Pentecost to the First Millennium - Paradise and Utopia: The Rise and Fall of What the West Once Was, VOLUME ONE (of a projected four-volume history of Christendom)

“Before there was a West, there was Christendom. This book tells the story of how both came to be.” (from the Introduction)

The Age of Paradise is the first of a projected four-volume history of Christendom, a civilization with a supporting culture that gave rise to what we now call the West. At a time of renewed interest in the future of Western culture, author John Strickland—an Orthodox scholar, professor, and priest—offers a vision rooted in the deep past of the first millennium. At the heart of his story is the early Church’s “culture of paradise,” an experience of the world in which the kingdom of heaven was tangible and familiar. Drawing not only on worship and theology but statecraft and the arts, the author reveals the remarkably affirmative character Western culture once had under the influence of Christianity - in particular, of Eastern Christendom, which served the West not only as a cradle but as a tutor and guardian as well.

About the Author: John Strickland is an Orthodox priest and former college professor. His first book, The Making of Holy Russia, is a study of the resilience of Christianity in the modern world. The second volume of Paradise and Utopia, The Age of Division, was published by Ancient Faith Publishing in 2020. An active blogger and podcaster, John brings to this series a lifetime of reflection on the religious background of the West. He lives in western Puget Sound with his wife and five children. 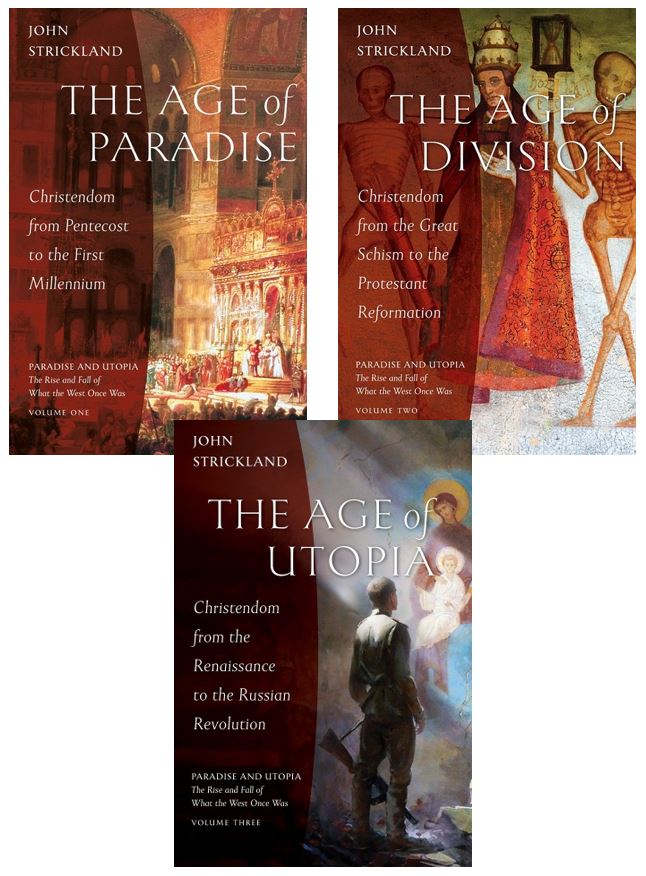 Paperback: 304 pages plus 8 pages of color photos (color pages may be b&w when shipping to locations outside of the United States)

eBook
$8.99 at Orthodox Christian Ebooks
$9.99 at Barnes and Noble, Amazon, and Apple

Related Media:
The Age of Division: Christendom from the Great Schism to the Protestant Reformation - Paradise and Utopia: The Rise and Fall of What the West Once Was, VOLUME TWO
Podcast - Ex Libris Author Interview

LOOK INSIDE... The Age of Paradise: Christendom from Pentecost to the First Millennium