The Age of Division: Christendom from the Great Schism to the Protestant Reformation

The Age of Division: Christendom from the Great Schism to the Protestant Reformation - Paradise and Utopia: The Rise and Fall of What the West Once Was, VOLUME TWO

If you have ever wondered exactly how we got from the Christian society of the early centuries, united in its faithfulness to apostolic tradition, to the fragmented and secular state of the West today, The Age of Division will answer all your questions and more. In this second of a four-volume cultural history of Christendom, author John Strickland applies insights from the Orthodox Church to trace the decline and disintegration of both East and West after the momentous but often neglected Great Schism. For five centuries, a divided Christendom was led further and further from the culture of paradise that defined its first millennium, resulting in the Protestant Reformation and the secularization that defines our society today.

About the Author: John Strickland is an Orthodox priest and former college professor. His first book, The Making of Holy Russia, is a study of the resilience of Christianity in the modern world. The first volume of the present work, The Age of Paradise, was published by Ancient Faith Publishing in 2019. An active blogger and podcaster, John brings to this series a lifetime of reflection on the religious background of the West. He lives in western Puget Sound with his wife and five children.

SAVE OVER 14% when you purchase the Paradise and Utopia 2-Book Set. The set includes The Age of Paradise and The Age of Division, the first two volumes of John Strickland's projected four-volume history of Christendom. 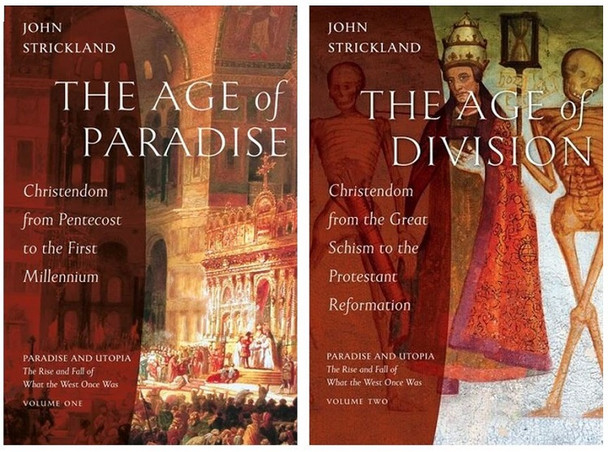 Related Media:
Podcast - Ex Libris - Author Interview
The Age of Paradise: Christendom from Pentecost to the First Millennium - Paradise and Utopia: The Rise and Fall of What the West Once Was, VOLUME ONE

LOOK INSIDE... The Age of Division: Christendom from the Great Schism to the Protestant Reformation

Orthodox Worship: A Living Continuity with the Synagogue, the Temple, and the Early Church

Retail:
Now: $69.00
Item No. 000682 Introductory handbooks on Orthodox Faith and life. Presented in brief chapters, this series is excellent for quick reference or study, and provides valuable teaching material for...
000682

Retail:
Now: $19.95
Item No. 001493 by Fr. Michael Pomazansky, translated by Seraphim Rose Written clearly, simply and concisely, this modern-day classic is accessible not only to theology students but to the...
001493

Mary As the Early Christians Knew Her: The Mother of Jesus in Three Ancient Texts

Retail:
Now: $16.99
Item No. 0008696 by Frederica Mathewes-Green Mathewes-Green opens up "The Gospel of Mary" to see her early life, offering a window into her centrality to the Christian Faith in new and sometimes...
008696

Paradise and Utopia 2-Book Set (The Age of Paradise, The Age of Division)

Retail: $41.90
Now: $36.00
Item No. 006097 Includes the first two volumes of a projected four-volume history of Christendom by John Strickland. The Age of Paradise: Christendom from Pentecost to the First Millennium -...
006097

The Broken Wheel: The Triumph of Saint Katherine

Retail:
Now: $5.00
Did you know that our sister organization, Ancient Faith Radio, is entirely listener-supported? No proceeds from the sale of our books or other products help fund this audio and video ministry. If...
AFRGIFT

Pilgrimage to Pascha: A Daily Devotional for Great Lent

2021 Icon Calendar, Icons of the Apostles of Christ SOLD OUT; NO LONGER AVAILABLE

Tending the Garden of Our Hearts and Ancient Faith Ministries present Rooted in Prayer: Virtual Vacation Church Camp Because so many of our vacation church camps will have to be different this year,...

Renewing You: A Priest, a Psychologist, and a Plan