We Came, We Saw, We Converted: The Lighter Side of Orthodoxy in America

Based on his popular blog and Ancient Faith Radio podcast, Orthodixie, Fr. Joseph Huneycutt presents a humorous look at the pluses, minuses, joys, pitfalls, and struggles of perpetual conversion within an Orthodox Christian worldview. Within these pages you’ll find all those familiar characters you’ve encountered in exploring American Orthodoxy but with a hilarious twist: the Orthodox Christian anarchist, the Orthodox white boy, and that incomparable superhero, Ortho-Man. You’ll be introduced to the lighter side of fasting, theosis, living a holy life in a secular world, and the struggle to understand those on the other side of the cradle/convert divide.

For those days when acquiring the mind of Christ seems impossibly serious and, well, just plain impossible, a quick dip into We Came, We Saw, We Converted will restore your sense of humor and help you get up and try again.

About the Author: Fr Joseph Huneycutt was reared a Southern Baptist in North Carolina. After more than a decade as an Episcopalian, he converted to Orthodoxy in 1993. He received a BS in Communication Arts from Appalachian State University (1982), a Master of Divinity from Nashotah House Episcopal Seminary in Wisconsin (1992), and a Doctor of Ministry in the Eastern Christian Context from Pittsburgh Theological Seminary in conjunction with the Antiochian House of Studies in 1999. In addition to developing and leading Orthodox retreats and conferences, Fr. Joseph is the Vice-Chairman of the Antiochian Department of Missions and Evangelism, and serves as Dean of the East Texas Deanery in the Diocese of Wichita and Mid-America. He is the Pastor of St Joseph Orthodox Church in Houston, Texas. He is the host of the Orthodixie podcast and co-hosts The 153 podcast on Ancient Faith Radio. Fr Joseph’s work has appeared in Touchstone magazine, Christian Bioethics journal, The WORD magazine, and on the Antiochian Archdiocese’s webpage. He is the author of One Flew Over the Onion Dome – American Orthodox Converts, Retreads, and Reverts (2006), Defeating Sin – Overcoming Our Passions and Changing Forever (2007), We Came, We Saw, We Converted – The Lighter Side of Orthodoxy in America (2009), and Fire From Ashes – The Reality of Perpetual Conversion (coauthored with Steve Robinson, 2014). He is currently compiling, editing, and annotating the works of his Pastoral Theology professor, the late Dr Charles Caldwell, tentatively titled: Dying Dionysius – The Living Faith of a Deathbed Convert. 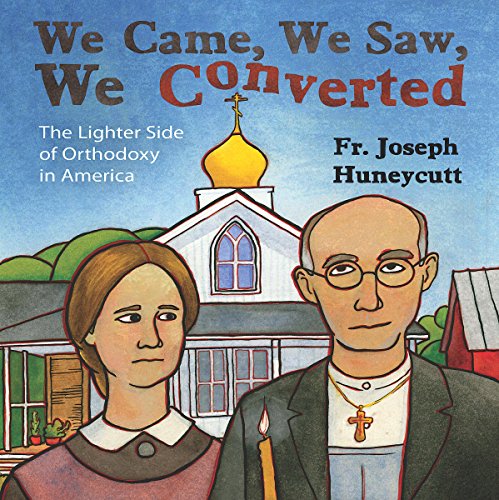 LOOK INSIDE... We Came, We Saw, We Converted: The Lighter Side of Orthodoxy in America