The Religion of the Apostles: Orthodox Christianity in the First Century

Father Dr. Stephen De Young traces the lineage of Orthodox Christianity back to the faith and witness of the apostles, which was rooted in a first-century Jewish worldview. The Religion of the Apostles presents the Orthodox Christian Church of today as a continuation of the religious life of the apostles, which in turn was a continuation of the life of the people of God since the beginning of creation.

About the Author: Father Stephen De Young is the pastor of Archangel Gabriel Orthodox Church (Antiochian) in Lafayette, Louisiana. He holds a PhD in Biblical Studies from Amridge University and is the host of The Whole Counsel of God podcast and co-host of the Lord of Spirits podcast on Ancient Faith Radio. He is also the author of The Whole Counsel Blog on the Ancient Faith Ministries website. For years Fr. Stephen has been teaching the Bible by taking ideas current in biblical scholarship and explaining them to laypeople to make both those ideas and the Scriptures more accessible.

Praise for The Religion of the Apostles:

“This book delves into contemporary scholarship on the religious beliefs of the Judaism of the Second Temple period. It sheds light on the ways that evangelists and the apostles understood the revelation of our Lord Jesus Christ and how the authors of the New Testament framed their narratives to communicate the very same Faith expressed later in the history of the Church. While challenging at times, this work opens new ways to read and understand the Old and New Testaments as well as our liturgical worship. These new ways always point to the wider Holy Tradition of the Orthodox Church. I welcome this work by Fr. Stephen and hope that readers will gain a fuller and deeper appreciation of the 'faith once and for all delivered to the saints.'" - +Joseph, Archbishop of New York and Metropolitan of the Antiochian Orthodox Christian Archdiocese of North America

"In the twenty-fourth chapter of St. Luke’s Gospel we are told how Cleopas and his companion were met by the risen Christ while walking to Emmaus. In the ensuing conversation we are told how Jesus 'explained to them the passages throughout the scriptures that were about Himself' (Luke 24:27). This passage, together with the event of the descent of the Holy Spirit at the first Pentecost, has been taken by the Church to indicate that from those events forward, the apostles had a complete and coherent Faith to pass on for the conversion of the world. In contrast, much scholarship in recent times has maintained the view that instead of being whole from the beginning, Church doctrine - particularly Christology - 'developed' to its definitive statements by the Great Councils. In contrast to these claims, Fr. Stephen De Young here presents forceful arguments to show that the Faith of the apostles was indeed complete from the beginning and was simply refined to meet heretical challenges. It is well worth reading." - +Melchisedek, Archbishop of Pittsburgh & Western Pennsylvania. Orthodox Church in America

"With this book, Fr. Stephen De Young is not only leading the charge for Orthodox apologetics in a world of secular biblical scholarship, but he is also doing us all a favor by reviving the cosmic frame of ancient Christians, giving hope to a jaded culture desperately looking for a re-enchanted world in which it can fully participate." - Jonathan Pageau, The Symbolic World 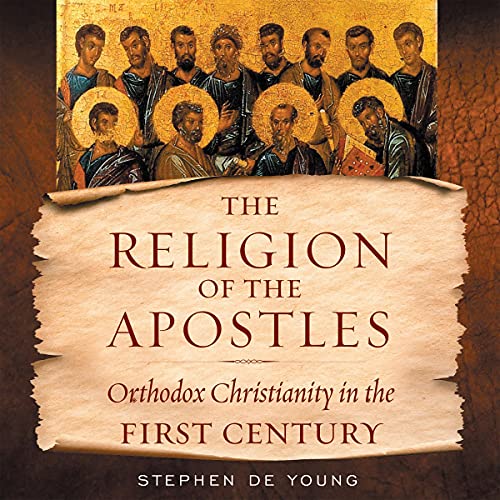 LOOK INSIDE... The Religion of the Apostles: Orthodox Christianity in the First Century

Christ in His Saints

Traveling Companions: Walking with the Saints of the Church

Ask for the Ancient Paths: Discovering What Church Is Meant to Be

The Names of Jesus: Discovering the Person of Jesus Christ through Scripture

If You Love Me: Serving Christ and the Church in Spirit and Truth

A Long Walk with Mary: A Personal Search for the Mother of God

The Lightkeeper: A Novel

Arise, O God: The Gospel of Christ’s Defeat of Demons, Sin, and Death

Bearing God: The Life and Works of St. Ignatius of Antioch the God-Bearer

The Broken Wheel: The Triumph of Saint Katherine

When You Fast: The Why and How of Christian Self-Discipline