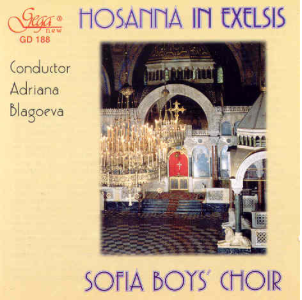 by the Sofia Boys' Choir directed by A. Blagoeva

The Sofia Boys' Choir is one of the most prestigious Bulgarian choirs of its kind, winner of many awards at international and national competitions. Under the guidance of the talented Adriana Blagoeva, during the past few years the choir has widened the range of its repertoire by including masterpieces of sacred music — both Catholic and Orthodox. The Sofia Boys' Choir perform liturgic chants by Dobri Hristov, Peter Dinev, Bortnyansky, Kedrov, Orlov and others. Of particular interest for the fans of religious music are the monodic chants - by authors or anonymous, such as Svyatii Boje or Slava Otsu (an old composition by the famous singer and composer John Koukouzeles).

Review:   The performances are distinguished by the unique beauty of sounds of the boy's voices led by the conductor with great skill. Each song features not only the professionalism of the great choirs, but also precision of dynamics, accents and gradation, typical of religious singing. The singers and their musicality, the perfectly performed tunes, the crystal sounds, as well as the characteristic reverberation of the recordings that recreates the atmosphere in Alexander Nevsky Cathedral leave a deep impression. —Benjamin Williams

Also available as a CD.