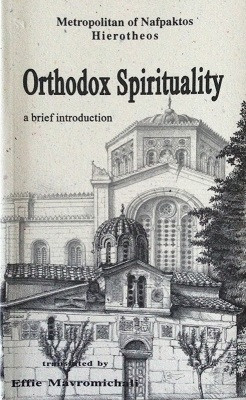 translated from the Greek by Effie Mavromichali

This book acquaints us with basic themes connected with Orthodox faith and Christian life. The key elements of Orthodox spirituality are defined, and we are introduced to the realm of Orthodox Tradition.

From an Amazon reviewer:

No Orthodox writer has influenced me—or been so consistently a joy to read—as Met. Hierotheos Vlachos. His theology in so many books is based squarely in the Church Fathers, is traditional (avoiding personal speculation or innovation), and is simple to read and understand. This little book is no exception.

Orthodox Spirituality is a short book of about 100 pages which avoids romanitic, vague statements about God and man and their relation but lays down simply the goal of man (union with God, or deification) and the method by which this occurs. The translator (wisely) avoids attempting to translate some words directly into an existing English term but spells them out as they sound in Greek, mainly the word "nous" (which is all too often translated in a misleading way as "mind" or "intellect"). Met. Hierotheos explains these terms so that the reader not only better understands his book but knows what other Orthodox authors actually mean when they attempt to translate them but do a poor job.

This book is short, but it should be read carefully, as its message is worth remembering in detail. Orthodox spirituality has been passed down in varying terms since the time of Pentecost, but the message has remained the same. In an age where "spirituality" has gained so many meanings as to have none, Met. Hierotheos clarifies what the only true spirituality is and how man can participate in it. Christianity, for him, is not a moralistic or legalistic book of laws; it is a spiritual path of purification, illumination, and deification which places man in his true natural state, regaining the likeness of God in union with Him.