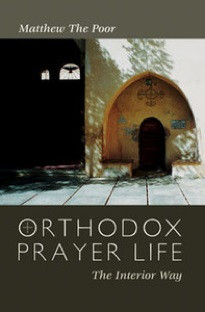 by Matthew the Poor

Saints who experience the power of prayer say it gives them wings to fly: wings of elation from being in proximity with Jesus Christ and relief from the burden of a sinful conscience. Once engulfed in the grace of the Holy Spirit, the person in prayer experiences death to sin, resurrection in the Spirit, and mystical ascension to the Father. The visible touches the Invisible, and joy wells up in the human heart.

This volume evolved experientially: the fruit of fifty-five years of solitude by a contemporary desert monk besieged by prayer. Father Matta's prayer life initially was formed under the direction of the sayings of the Russian Fathers, and later expanded under the direction of other Fathers, both Eastern and Western. He spent whole nights in prayer, reciting one or two passages from these luminaries and begging these saints to enlighten his understanding.

Desiring to share the lessons he learned, and compelled by the Holy Spirit to do so, he wrote this volume so that he might impart to his readers "a whole course" on the life of prayer.

About the Author: Known in the West as Matthew the Poor, Abba Matta is widely regarded as the greatest Egyptian elder since St. Antony the Great. He produced a huge and varied body of work in Arabic, only a little of which has been translated into English. In addition, a great many of his informal talks to monks and visitors were recorded. He had a marvelous ability to communicate the deepest spiritual truths in the simplest and most practical language, making them accessible to laypeople as well as monastics. He speaks to the heart rather than the head, gently exhorting the reader to pursue a deeper life in Christ.