Nearly Orthodox: On Being a Modern Woman in an Ancient Tradition

From Catholic schoolgirl to punk rocker to emergent church planter, Angela Doll Carlson traveled a spiritual path that in many ways mirrors that of a whole generation. She takes us with her on a deep and revealing exploration of the forces that drove her toward Orthodoxy and the challenges that long kept her from fully entering in.

About the Author: Angela Doll Carlson is a poet and essayist whose work has appeared in Burnside Writer’s Collective, Image Journal’s “Good Letters,” St. Katherine Review, Rock & Sling Journal, Ruminate Magazine’s blog, and Art House America. You can also find her writing online at Mrsmetaphor.com, NearlyOrthodox.com, and DoxaSoma.com. Angela and her husband, David, currently raise their four chaos-makers in the wilds of Chicago with some measurable success.

"With uncommonly keen insight born of uncommonly keen honesty, Angela Doll Carlson has given us an uncommon pilgrim’s journey, one that might actually serve, comfort, and assist other pilgrims along the way." -Scott Cairns, author of Short Trip to the Edge and Idiot Psalms

"Because [this writer] is a poet, her deeply felt and unsparingly described progress as a seeker resounds with freshness. There is some extraordinarily authentic writing here, some insights of profound simplicity and truth,... a story penetratingly painful but revelatory. She tells us that Orthodoxy settled into her, soul and skin. And we believe her." -Luci Shaw, author of Scape: Poems, and Adventure of Ascent: Field Notes from a Lifelong Journey; Writer in Residence, Regent College

"Angela Doll Carlson has been a chain-smoking poet, a singer in a punk band, a tattooed mother who types film scripts while nursing her infant daughter. Indeed, she’s unorthodox in almost every sense of the word... except for the one that ultimately comes to matter. A wise and beautiful memoir." -David McGlynn, author of A Door in the Ocean and The End of the Straight and Narrow

"With deft, poetic writing, Angela Doll Carlson recounts the struggle to know herself, to know herself in God, and to know herself in and through the ancient tradition of Eastern Orthodoxy. Her story resounds with truth, humor and the desire to encounter the holy. Highly recommended." -Mary C. Earle, author of The Desert Mothers: Spiritual Practices from the Women of the Wilderness 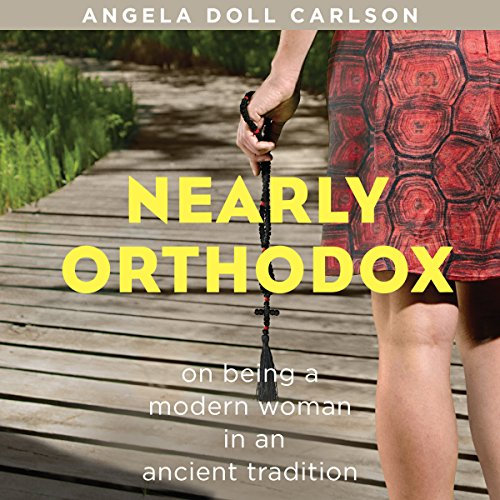 LOOK INSIDE... Nearly Orthodox: On Being a Modern Woman in an Ancient Tradition