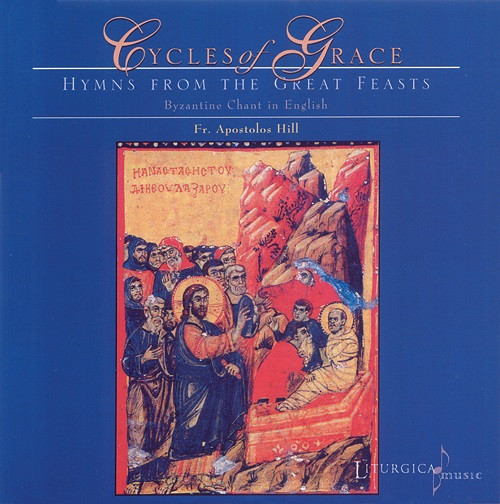 Offers a cross-section of contemporary and traditional Byzantine chant arrangements from the Great Feasts of the Church's liturgical cycle.

In the Eastern Christian tradition, the cycle of Great Feasts follows the Church's liturgical calendar beginning on September 1 and running through August. It is comprised of twelve fixed and variable Feasts, with Pascha (Easter in the West), the "feast of feasts" around which all the rest are centered. Pascha is the ultimate variable feast, with its date changing each year. Associated with Pascha are the feasts of Palm Sunday, Ascension and Pentecost that precede or follow it by a specific number of days. Thus these Great Feasts tend to be associated together. This recording is comprised of two CDs, and is specifically focused on the Great Feasts of the Lord.

Includes thorough liner notes, comments from the artist, and complete hymn text in English. Also included is a bonus track: a favorite liturgical hymn of Fr. Hill that is seldom recorded.

This 2-CD set is Fr. Hill's third recording of Byzantine chant in English, and fills in a missing range of hymnology in recordings in general, and specifically of Byzantine chant in English. The concept of a recording of hymns from the cycle of the Great Feasts is commendable in itself. The selections of representative and "most loved" hymns from these Feasts does a double service: it makes them available in English, and also addresses the teaching role that liturgical hymnology naturally has. Fr. Hill's voice, while still wonderfully clear and with perfect pitch, has matured and it is evident on this recording. His voice has deepened and has become richer, able to convey warmer and deeper nuance, for instance in the Katavasias of the Holy Cross, a beautiful set of hymns sung during Matins (Orthros) of the Feast, while still hitting the thrilling highs, as in To Thee the Champion Leader. As always, he is able to convey the pathos of some hymns (the Exapostelarion of the Holy Cross, reminiscent of (Today is suspended... from Holy Week), the affection of others (Exapostelarion of the Entry of the Theotokos), the reverence of some (Kontakion of the Nativity) and the pure joy of others (the Doxastikon from the Orthros of Pascha). The arrangements presented are typical of those found in the Greek Orthodox Archdiocese of North America. The quality of the recording and engineering are very high; clean and crisp. The hymns are sung with commitment and affection, and they come through clear as a bell. If you are a fan of Fr. Hill's recordings, you'll want this CD; if you are interested in hearing the Festal hymns sung in English, this is a must have.

Also available as a two-CD set.

Katavasias of the Nativity of Christ