Apostle to the Plains: The Life of Father Nicola Yanney

by The Saint Raphael Clergy Brotherhood

In 1892, a young man left his home in the coastal foothills of Lebanon in search of a better life. Coming to America with his newlywed wife, he found work as a traveling peddler before settling on a small farm in central Nebraska. Years later, personal tragedy and an unexpected midnight visit from a saint changed the course of his life. Seeing the desperate need of his fellow Orthodox Christians and heeding God’s call, he would spend the rest of his life traversing the Great Plains as a circuit-riding priest, known to his thousands of parishioners as Father Nicola Yanney. His legacy stands alongside that of St. Raphael Hawaweeny, his mentor, as a seminal force in the American Orthodox Church of our day.

Ancient and Marvelous: The Life of Father Nicola Yanney

In this new documentary from Ancient Faith Films, learn about Father Nicola Yanney who in 1892 left his home in the coastal foothills of Lebanon in search of a better life. Personal tragedy and an unexpected midnight visit from someone who would become a saint changed the course of his life. Heeding God's call he became a circuit-riding priest to thousands of parishioners in the farmlands of Nebraska and beyond. 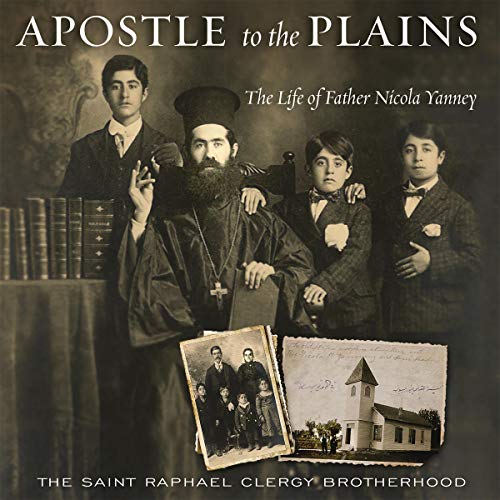 LOOK INSIDE... Apostle to the Plains: The Life of Father Nicola Yanney

Dimitri’s Cross: The Life and Letters of St. Dimitri Klepinin, Martyred during the Holocaust

An Englishman in the Court of the Tsar: The Spiritual Journey of Charles Sydney Gibbes

And He Leads Them: The Mind and Heart of Philip Saliba

The Sweetness of Grace: Stories of Christian Trial and Victory

A Little Corner of Paradise: The Life and Teachings of Elder Paisius of Sihla

I Live Again: A Memoir of Ileana, Princess of Romania and Archduchess of Austria

Led by His Love: An Evangelical Pastor’s Journey to the Orthodox Faith

Retail:
Now: $17.00
Item No. 006045 During the dark night of Soviet totalitarianism, holy men and women shone like stars throughout the many lands that comprised the U.S.S.R. One of these was Elder Vitaly (Sidorenko)...
006045

The Cross and the Stag: The Incredible Adventures of St. Eustathius

Of Such Is the Kingdom: A Practical Theology of Disability

Out of Step with God: Orthodox Christian Reflections on the Book of Numbers

Fertile Ground: A Pilgrimage through Pregnancy

Under the Laurel Tree: Grieving Infertility with Saints Joachim and Anna

I Live Again: A Memoir of Ileana, Princess of Romania and Archduchess of Austria

A Journal of Thanksgiving: Record Three Years of Gratitude in a Sentence a Day

A Daily Calendar of Saints: A Synaxarion for Today's North American Church