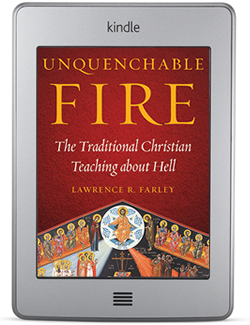 The doctrine of hell as a place of eternal punishment has never been easy for Christians to accept. The temptation to retreat from and reject the Church’s traditional teaching about hell is particularly strong in our current culture, which has demonstrably lost its sense of sin.

Fr. Lawrence Farley examines the Orthodox Church’s teaching on this difficult subject through the lens of Scripture and patristic writings, making the case that the existence of hell does not negate that of a loving and forgiving God.

About the Author:  Archpriest Lawrence Farley is the pastor of St. Herman of Alaska Orthodox Church (OCA) in Langley, B.C., Canada. He received his B.A. from Trinity College, Toronto, and his M.Div. from Wycliffe College, Toronto. A former Anglican priest, he converted to Orthodoxy in 1985 and studied for two years at St. Tikhon’s Orthodox Seminary in Pennsylvania. In addition to the Orthodox Bible Companion Series, he has also published Let Us Attend, One Flesh, The Christian Old Testament, and A Daily Calendar of Saints.