Dimitri’s Cross: The Life and Letters of St. Dimitri Klepinin, Martyred during the Holocaust

In February of 1943, Fr. Dimitri Klepinin, an Orthodox priest serving the Russian emigre community in occupied Paris, was arrested by the Nazis for issuing false baptismal certificates to Jews. One year later, he died in the concentration camp at Dora, near Buchenwald--a camp known as "the Man-Eater."

Father Dimitri, an associate of Mother Maria Skobtsova, was glorified by the Orthodox Church on January 16, 2004. In this volume, his daughter, born only five years before his arrest, lovingly tells the story of her father's life: his early search for faith and meaning in a life upended by revolution and exile; his decision to enter the priesthood; his devotion to his wife and children; his sacrificial service to his parish at the rue de Lourmel; and his heroic decision to do all within his power to save the Jews who came to him desperate for protection from the growing Nazi menace.

The final section of the book consists of Fr. Dimitri's letters to his wife from his initial confinement at Compiegne. In these letters we glimpse the humble, dauntless spirit of a man whose reliance on Christ was absolute and whose devotion to serving his fellowman did not waver, even to the grave.

"The name of St. Dimitri Klepinin is not yet well known. It is only a few years since he was canonized. But this book, written by his daughter, will do a great deal to make the life and witness of this young priest better known. The story of Fr. Dimitri's life may seem somber, but this is a hard-to-put-down book about a remarkable man whose life as a priest, a husband and father was governed by Christ-like love." -Jim Forest, author of Silent as a Stone: Mother Maria of Paris and the Trash Can Rescue

"For those of us striving to live a good Christian life, it is important to have put before us some living examples of those who did this to the fullest. This book, a testimony of love and sacrifice, introduces us to the life of a Russian Orthodox priest who lived for others and died a heroic death. He carried his cross to the end. The righteous shine like the stars of heaven (Orthodox service for the departed)." -Vera Bouteneff, translator of Father Arseny, 1893-1973: Priest, Prisoner, Spiritual Father

"There are no ordinary words in this luminous book, which is fitting, since St. Dimitri was no ordinary man. The light of Christ shines with hope and intensity through the life of St. Dimitri; no one should pass up the opportunity to read this transparent, heartfelt story." -Virginia H. Nieuwsma, editor of Our Hearts True Home 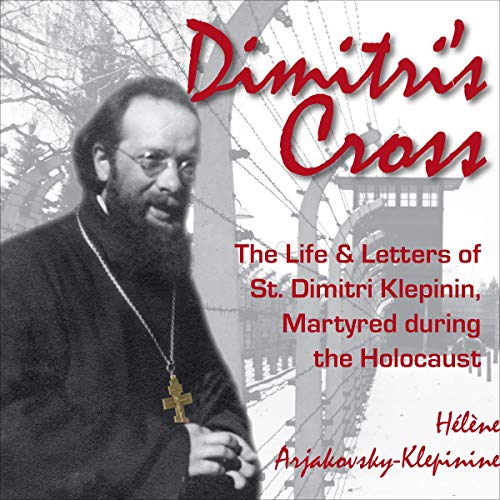 LOOK INSIDE... Dimitri’s Cross: The Life and Letters of St. Dimitri Klepinin, Martyred during the Holocaust